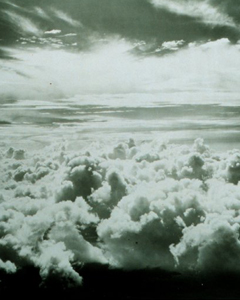 Synoptic and mesoscale atmospheric processes occur on spatial and temporal scales typically categorized as weather. In this talk I will discuss the need to view weather not just in terms of its local outcomes (e.g., precipitation rate and distribution) but as an integral part of a larger multi-scale system. I will show results from recent work by myself and my group that indicates there are tipping points in many weather systems associated with the interactions among cloud microphysics, dynamics, and the thermodynamic environment. Using numerical models, remote sensing observations, and Bayesian inverse methods, we have examined extratropical cyclones, tropical deep convection, orographic clouds, and tropical cyclones. In each case, we find significant changes in cloud structure, dynamics, and radiative transfer that appear to be modulated by cloud microphysical processes. The results motivate a deeper exploration of process level interactions between mesoscale cloud systems and their environments. They also highlight the need for more accurate and timely observations, as well as improved understanding of uncertainties in model cloud and convection parameterizations. Building on my research results, I will conclude with a discussion of current and near future observing system design, numerical model development, and the integrative role of data assimilation.

Derek Posselt is an Associate Professor in the department of Atmospheric, Oceanic, and Space Sciences at the University of Michigan. He received his Bachelors and Masters degrees in Atmospheric and Oceanic Sciences from the University of Wisconsin in 1997 and 2001, respectively. His MS thesis work focused on cloud effects on extratropical cyclones. Prior to beginning his doctoral studies in 2003, Dr. Posselt worked as a researcher at the Cooperative Institute for Meteorological Satellite Studies at the University of Wisconsin. He obtained his Ph. D. in Atmospheric Science from Colorado State University in 2006, then held a one year post-doctoral appointment joint with CSU and NASA Goddard Space Flight Center. His doctoral and post-doctoral advisors were Drs. Graeme Stephens and Arthur Hou. From 2007 to 2011, Dr. Posselt was employed as an Assistant Research Scientist at the University of Michigan, then joined the tenure track faculty in 2011. Since 2012, he has served as deputy Principal Investigator on the NASA Earth Venture Cyclone Global Navigation Satellite System (CYGNSS) mission. Dr. Posselt’s research interests center around examination of synoptic and mesoscale cloud systems, and their interaction with larger scale dynamics, radiation, and thermodynamic state. In addition to his work on the CYGNSS mission, he is a current member of the CloudSat/CALIPSO science team. He has been a member of the AMS Satellite Meteorology Committee since 2010, served on the NASA Earth Science Senior Review panel in 2013 and 2015, and will serve on the NASA Langley Science Directorate Peer Review panel in fall 2015. He is actively involved in development and testing of active and passive remote sensing algorithms using both ground and space-based measurements. Dr. Posselt is an active user and developer of the NASA Goddard Cumulus Ensemble model and the Weather Research and Forecasting model. He is also working on the development of new data assimilation algorithms better suited to estimation of clouds and precipitation. He has pioneered the use of Bayesian Markov chain Monte Carlo algorithms in model sensitivity analysis, quantification of observation information content, and evaluation of data assimilation methodologies. He currently advises 5 Ph. D. students and 2 M.S. students, is lead advisor for two undergraduate engineering design teams, and teaches courses in Cloud Physics, Geophysical Fluid Dynamics, and Data Assimilation.