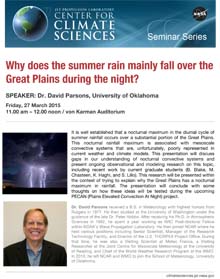 It is well established that a nocturnal maximum in the diurnal cycle of summer rainfall occurs over a substantial portion of the Great Plains. This nocturnal rainfall maximum is associated with mesoscale convective systems that are, unfortunately, poorly represented in current weather and climate models. This presentation will discuss gaps in our understanding of nocturnal convective systems and present ongoing observational and modeling research on this topic, including recent work by current graduate students (B. Blake, M. Chasteen, K. Haghi, and S. Lillo). This research will be presented within the context of trying to explain why the Great Plains has a nocturnal maximum in rainfall. The presentation will conclude with some thoughts on how these ideas will be tested during the upcoming PECAN (Plains Elevated Convection At Night) project. 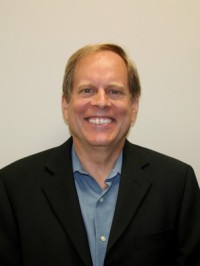 Dr. David Parsons received a B.S. in Meteorology with highest honors from Rutgers in 1977. He then studied at the University of Washington under the guidance of the late Dr. Peter Hobbs. After receiving his Ph.D. in Atmospheric Sciences in 1982, he spent a year working as NRC Post-doctoral Fellow within NOAA’s Wave Propagation Laboratory. He then joined NCAR where he held various positions including Senior Scientist, Manager of the Research Technology Facility, and Director of the U.S. THORPEX Project Office. During that time, he was also a Visiting Scientist at Meteo France, a Visiting Researcher at the Joint Centre for Mesoscale Meteorology at the University of Reading, and Chief of the World Weather Research Program at the WMO. In 2010, he left NCAR and WMO to join the School of Meteorology, University of Oklahoma.