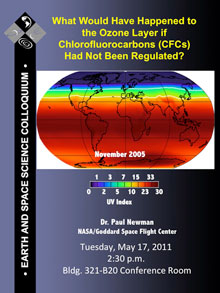 Imagine a world where a 5-minute walk would give you a sunburn. Such a world could have happened if human-produced chlorofluorocarbons had never been regulated. Paul Newman discusses two model simulations: the expected future under the MP, and a future where ozone depletion substances weren’t regulated.

About Dr. Paul A. Newman

Dr. Paul A. Newman is the Chief Scientist for Atmospheres in the Earth Sciences Directorate of NASA’s Goddard Space Flight Center. He was born and raised in Seattle, WA. He completed his Bachelors of Science at Seattle University (1978) and doctorate in Physics at Iowa State University (1984). He joined NASA in 1990. His primary expertise is stratospheric chemistry and dynamics. He has been project scientist on numerous NASA airborne field missions, and is currently a co-chair of the Scientific Assessment Panel to the Montreal Protocol.