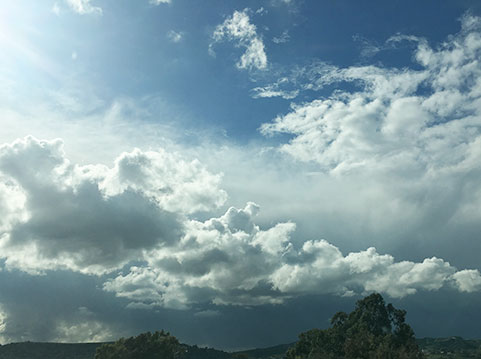 In 1922, Lewis Fry Richardson posed the dream of using a grid of prognostic equations to accurately compute future weather before it arrives. But while weather predictability has been realized, and despite tremendous improvements in computational speed and physical understanding, we have been less successful at constraining the future role of clouds in climate. The general scientific strategy for tackling the problem has been to model clouds using Richardson’s deterministic concept for weather. But does this make the most sense? I will discuss an alternative time-independent approach where, statistically speaking, the complex geometries of tropical convective cloud fields can be seen to “emerge” from a point value of the bulk tropospheric stability. Circulations around cloud edge compete with each other for total buoyant energy and air, and this constrains both total cloud amount and the distributions of cloud sizes. Theoretical predictions are in close agreement with a detailed LES tropical cloud field simulation of one billion grid points, and with Oxygen A-band satellite retrievals over the tropics. Possible implications for cloud distributions and cover in a warmer climate will be explored.

Tim Garrett is a Professor of Atmospheric Sciences at the University of Utah where he has taught since 2002. His research focuses on development of new theoretical and observational tools for understanding the role of clouds and precipitation in weather and climate.