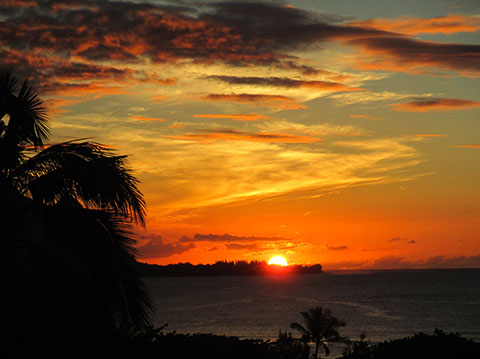 Climate models have significant errors in precipitation globally, but in particular in the tropics. Most models overestimate annual mean tropical precipitation, with the largest errors occurring over the warm tropical oceans of the Western Pacific, Indian Ocean and Atlantic. In addition to the mean errors, there are significant shortcomings in the rainfall variability in space and time. Given its immediate impact on tropical rainfall, most of the errors are usually attributed to shortcomings in the representation of deep tropical convection, and most attempts at their remedy focus on changes to the processes involved in it.

We show that in observations the tropics, defined as the latitude belt from 30 degrees north to 30 degrees south, are very close to radiative convective equilibrium every day. This indicates that to first order tropical precipitation and radiative cooling are in balance even on short (daily) timescales. We show that this balance is a result of small regions of precipitation with very inefficient cooling – the deep tropics – and large regions of efficient cooling but little precipitation – the subtropics. We show that models obey this balance. This opens the intriguing possibility that mean rainfall errors in the deep tropics are the result of errors in radiative cooling and that the model’s convection is simply a slave to the radiative cooling away from the rainy regions.

We investigate this hypothesis using several models run in a variety of configurations, ranging from Aquaplanet experiments with the German ICON model, to AMIP simulations with a range of models with and without cumulus parametrization. The models produce a wide range of tropical rainfall values and all of them are directly related to the tropical radiative cooling. We investigate the key regions of radiative cooling changes as the model rainfall changes and highlight potential mechanisms involved.

Christian Jakob is the Professor for Climate Modelling at Monash University. Christian earned his MSc in Meteorology at the Humboldt University in Berlin and his PhD in the same subject at the Ludwig-Maximilians University Munich. His career has focused on advancing our understanding of the role of the tropics in the Earth’s energy and water cycles. In particular he develops new approaches for the representation of tropical convective systems in weather and climate models. Before joining Academia, he held positions at the European Centre for Medium-Range Weather Forecasts and the Australian Bureau of Meteorology. He is the current co-chair of the World Climate Research Programme’s Modelling Advisory Council. He was a Lead author on the IPCC’s 5th Assessment report chapter on model evaluation. He has published more than 100 scientific articles and contributed to the development of several of the major weather and climate models across the globe.